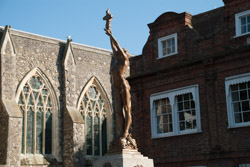 Unveiled in 1924, the memorial was designed by Richard Goulden, a Dovorian and veteran of the Great War. In the War Memorial garden, mounted on a concrete block, is a grappling iron used in the heroic raid by the Dover Patrol to prevent German submarines leaving their base by blocking the Port of Zeebrugge on St. George’s Day, 23rd April 1918. 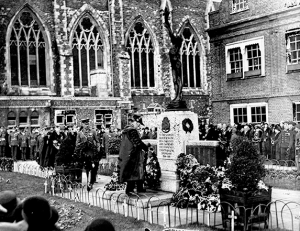 Richard Goulden’s father ran a book selling business in the town. Richard, who was born in 1876 and educated at Dover College and Dover School of Art, went on to design many other war memorials in the country, especially in London. During the 1914-18 war he served in the Royal Engineers, was promoted captain and was wounded in battle.

Goulden’s statue in bronze shows a young boy holding a Holy Cross. He must have been very proud that his design was selected by his home town. Part of the funding for this memorial came from money raised, but not completely spent, to help British prisoners of war in German camps. It took several years after the war to decide which form Dover’s war memorial should take. 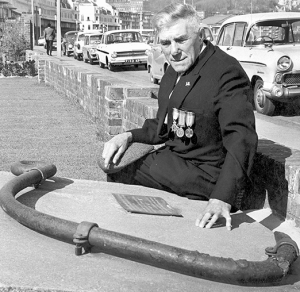 Go back to the Trail Map