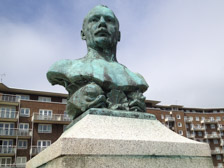 Captain Matthew Webb was the first man to swim the Channel unaided.  Webb gave up his job as a ship’s captain to train for the ordeal.  His first attempt, on 12 August, failed when a storm blew up but on 24 August 1875 he succeeded, taking 21 hours 45 minutes and actually swimming 64 kilometres rather than the 34km straight line distance.  Webb died attempting to swim across the Whirlpool Rapids below Niagara Falls in 1883. 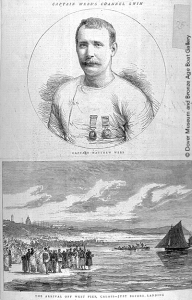 This interesting memorial to Captain Matthew Webb, sculptured by Doyle Jones in 1910, is visited each summer by scores of long distance swimmers who want to emulate his feat of swimming from Dover to France. His was the pioneer channel swim, completed successfully in August 1875. The experts predicted no one else would ever achieve the crossing. It’s now been achieved several hundred times, but others keep coming to have a go.Interestingly Captain Webb’s swim would not be accepted as an official success today. He started by diving off a Dover pier. Today’s rules on channel swimming are stricter. Every swim must be from shore to shore. 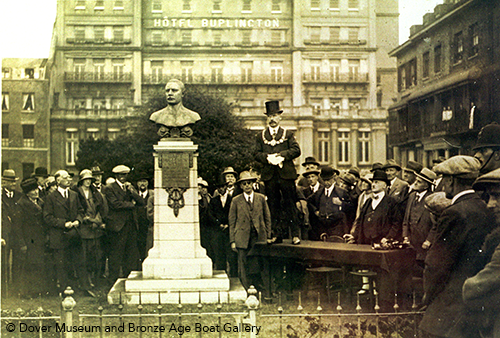