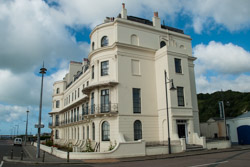 The handsome Waterloo Crescent was built between 1834 and 1838. At its western end is Harbour House, the headquarters of Dover Harbour Board. In 1606, at the instigation of James I, Dover Corporation agreed to transfer control of the harbour to ‘eleven discreet men’, headed by the Lord Warden of the Cinque Ports. 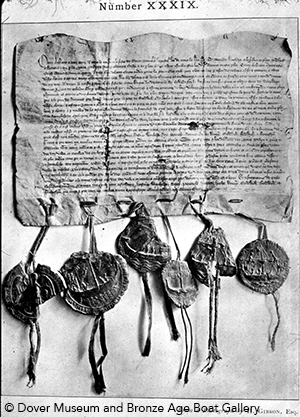 This stretch of Dover’s waterfront, including Waterloo Crescent, has changed many times ever since the North Sea waters poured in to create the English Channel thousands of years ago.

Prior to the 19th century the sea front of Dover Bay (not yet enclosed with the present harbour walls) had no houses. It was just a ridge of shingle that had begun to build up in the year 1500. An Act of Parliament in 1778 approved the gathering of the beach pebbles to be used for the paving of Dover’s streets.

In the early years of the 19th century, Dover’s small port was administered by Harbour Commissioners, with the Earl of Liverpool as chairman. It was the Earl who decided the sea front area was too valuable to remain idle. Houses were to be built where none existed. These houses, many built on shingle foundations, were begun soon after. Marine Parade was constructed in 1820.At the western end of the bay, construction work on houses on the Esplanade was begun in 1833 and the more elegant properties in Waterloo Crescent a year later.

Many properties were opened as small hotels or guest houses and the owners enjoyed good business with visitors who wanted a healthy week by the sea. Property at the western end of the central block of Waterloo Crescent was selected by the Duke of Connaught, son of Queen Victoria, as his home when he was an officer in the Dover garrison in the early 1870s.