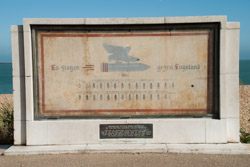 This is a very unusual monument containing a section of the armour-plating from one of the German long-range 406mm guns, called ‘Caesar’, sited at Batterie Lindemann near Sangatte in the Pas de Calais.  The gun was silenced by Canadian troops who captured it in September 1944.  The plating is inscribed ‘Es flogen gegen Engeland’ ‘They flew against England’, and a tally of rounds fired is recorded.

The so-called Lindemann monument on the sea front often leads visitors astray. It indicates the number of shells fired at Dover from one German long range gun on the French coast during a limited time. But there were many more shells fired at Dover than indicated here. More than 2,000 enemy shells hit the town with many more in the harbour waters. 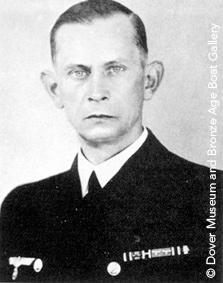 Ernst Lindemann, Captain of the Bismarck

Why Lindemann? When in 1940 the enemy captured the French coast, 21 miles away from Dover, they installed guns to fire across the Channel. One battery, with three 16 inch guns, was named the Lindemann Battery after Ernst Lindemann, the captain of the German battleship Bismark, who died when the British sank his ship.

There were a number of German guns firing across the Strait from August 1940 until September 1944 when they were captured and silenced by the advancing Canadian troops following D Day. The Canadians and members of the French population kindly retrieved this wall plaque from the captured gun emplacement and gifted it to the people of Dover who decided to place it on the sea front promenade.