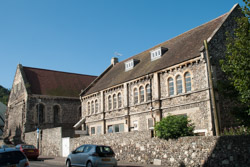 From the college entrance parts of the ancient priory are visible, including the gatehouse, incorporated into Dover College when it was founded in 1871.  Dedicated to the Virgin Mary and St. Martin, it was also known as St. Martin Newark (New Work), and was begun in 1130 by Archbishop Corbeil.  The small Benedictine community, with its superb library, was suppressed by Henry VIII in 1535.  Some of the buildings were then plundered for their stone and for many years what remained was a farm.  The boundary wall is built of flint and medieval masonry rescued from the ruins.  The former refectory, now the college hall, is a most impressive example of Norman architecture, 100 ft long, it is built of flint faced with bands of stone from Caen in Normandy. From 1845-7, when the Priory Estate was being laid out, the foundations of the great Priory Church, some 300 ft long, were recorded.  The transepts almost followed the line of Effingham Road and the chancel extended nearly halfway down the present Saxon Street.  The tower over the crossing stood almost at the junction of the two streets. Note the Dover Society plaque by the college entrance commemorating composer Thomas Tallis who was organist at the Priory in the 1530s. 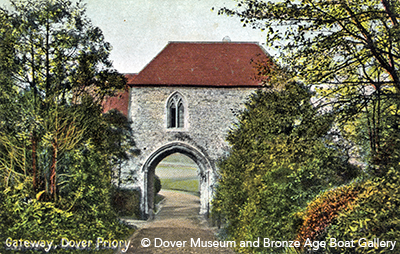 In 1295 a French fleet landed at Dover and raided the town, seizing and sacking St. Martin’s Priory.  All the Benedictine monks fled except aged Thomas de la Hale.  Apparently the French demanded to know where the Priory’s treasures were hidden, but Thomas refused to say.  After the French left with their plunder his fellow monks came out of hiding and found Thomas brutally murdered. A shrine was set up which became a place of pilgrimage and miracles were attributed to him. Later, in the 14th century, Richard II asked the Pope to make Thomas a saint who asked the Archbishop of Canterbury to research the claim, but this was thwarted by the church authorities in Canterbury, possibly fearing a rival saint to Thomas Becket. Nevertheless, pilgrims visited the Priory until its dissolution in 1535.