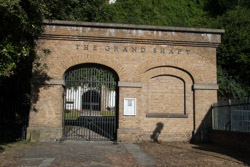 The Grand Shaft was built between 1804 and 1807 as a short-cut for soldiers stationed in the barracks and forts of the Western Heights, The Grand Shaft consists of a unique triple spiral staircase through the chalk cliff.  Each staircase has 140 steps within the cliff and another 59 into the former Grand Shaft  Barracks’ yard.  Notices placed at the top of each staircase changed slightly over the years.  One version is: 1.  Officers and their ladies, 2.  Sergeants and their wives, 3.  Soldiers and their women.  The original purpose, however, was for speed rather than class distinction. In the event of the invasion threatened by Napoleon Bonaparte, troops could be quickly assembled at sea level. 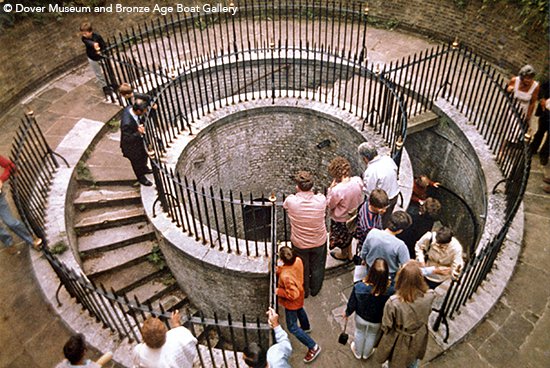 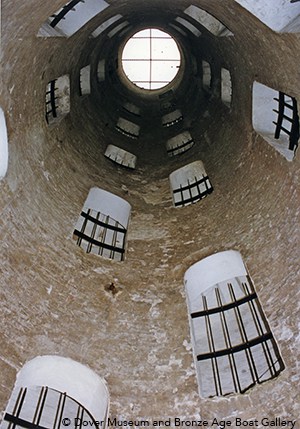 The Western Heights may be reached via the Grand Shaft, when it is open, or via York Street and Military Road. Using the latter route you will pass the ruined foundations of what is thought to be a Knights Templar church with its circular nave and short chancel.  Excellent views of the town, harbour, Eastern Heights and, on clear days, the French coast may be obtained.  Fortification began in 1779 when England was at war with America and feared attack from America’s allies, France, Spain and the Netherlands.  The Drop Redoubt, a detached fort, may be visited on Open Days.  The Citadel, further west is a much larger fort, now used as an Immigration Removal Centre and not open to the public.  Barracks located near the top of the Grand Shaft were demolished in the 1960s. Snargate Street at the foot of the Heights was, before World War I, the main shopping area of Dover.

The chalk cliffs conceal many extensive man made cave systems that were used as air raid shelters during both world wars.