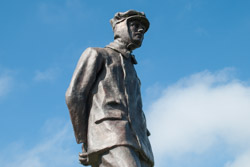 Charles Stewart Rolls, on 2 June 1910, became the first man to cross the Channel both ways in a single flight. Leaving Swingate aerodrome near Dover at 6.30pm, Rolls was back in Dover at 8pm when he was carried shoulder high through the town.  Only a month later, at a flying display at Bournemeouth, he became the first Briton to be killed in a flying accident.

This monument, in bronze, is dedicated to the memory of the Honourable Charles Rolls (he of Rolls-Royce fame) who became the first person to fly a heavier than air machine across the Channel and back again. His daring “there and back flight” was one of his last. He was killed in a flying accident a few months later. 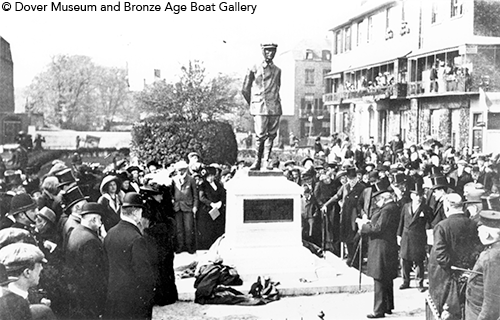 This statue, unveiled in April 1912 by the Duke of Argyle, was sculpted by Kathleen, the wife of the ill-fated polar explorer Captain Robert Falcon Scott. She completed the work not knowing her husband had perished.