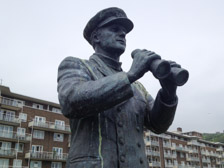 This memorial honours more than 30,000 men of the Merchant Navy who died during the Second World War. One in three Merchant Navy seamen died during the war when 2627 merchant ships were sunk braving U-boats in the Atlantic and bringing much needed food and munitions to Britain. There were also heavy losses elsewhere including the Arctic convoys supplying Russia.

This life-size majestic memorial, depicting a Merchant Navy officer holding his binoculars, recalls the bravery and dedication of thousands of Merchant Navy seafarers who, bringing in food and fuel, ensured the nation did not starve during the 1939-45 war.It is recorded that one in three British Merchant Navy seafarers died. A total of more than 45,000 died, were reported missing or were wounded. This memorial, costing nearly £50,000, was provided by the Dover and District Merchant Navy Fund Association. Each year a remembrance service is held here.