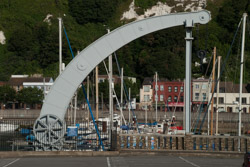 An unusual feature of the Wellington Dock, now a marina and formerly the Great Pent, into which the River Dour flows, is the Fairbairn hand crank tubular crane  dating from 1868 and known locally as the ‘gooseneck’ for obvious reasons.

Sited on Esplanade Quay in the Wellington Dock, the Fairbairn Crane was installed in 1868 to lift heavy equipment, including ammunition, guns and ships’ equipment, on and off vessels. It was designed by William Fairbairn, born in Scotland in 1789, who made machinery in Manchester for cotton mills and cranes. Later, he built iron ships in Millwall. 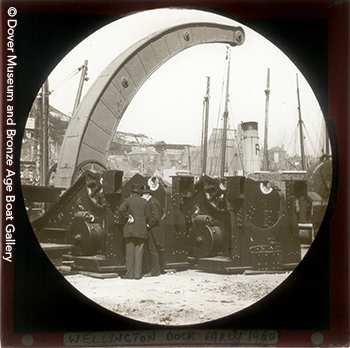 In Dover wooden boats were built on Shakespeare Beach, but shipbuilding moved to the Wellington Dock when it was built in the 1840s. This local industry declined with the arrival of larger, iron ships and the last Dover vessel was built in 1878.