The new Marina Curve is part of the Western Docks Redevelopment Project. This was the site of the Prince of Wales Pier, half a mile long and constructed between 1893 and 1902.  In 1977 the Hoverport was built on the west side and operated a regular service to Calais until 2005. A 19th century clock tower and former lifeboat station are by the former pier entrance. The pier will be largely incorporated in the Western Docks Cargo Terminal. 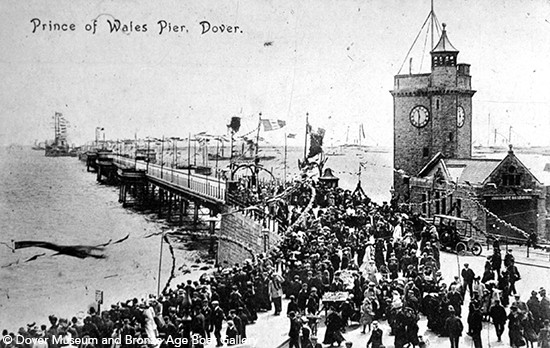 Opening of the Prince of Wales Pier
d25315

The foundation stone of this pier was laid by the Prince of Wales (later Edward VII) in 1892 and for some years was the first place passengers from liners stepped ashore on English land. At one time large German liners, bound for America, berthed here. To encourage Dover as a port of call for Atlantic liners a railway track was laid along the pier to carry trains with passengers from London.

The pier was a favourite walk for local people and visitors and was popular with anglers permitted to fish without charge. The pier was closed to the public early in 2016 to allow the development. You can still see the original gates and the foundation stone.