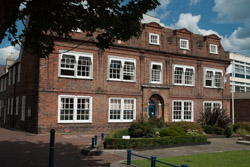 Set back behind the town’s war memorial is Maison Dieu House built in 1665 as the office of the Agent Victualler of the Navy and now the Town Council Offices. The impressive staircase inside, with turned balusters, is contemporary with the building. 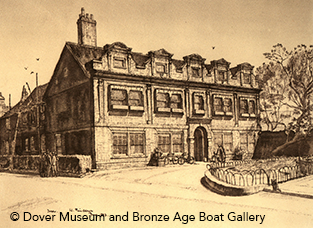 In 1830 it was occupied briefly by the officer in command of the Royal Engineers at Dover until sold to a private owner. Later in the century Maison Dieu House was the home of Mr R.W.Mummery who was three times mayor of Dover and who died in the property. Albert Mummery, the well known mountaineer, was born here in 1855 and he died while climbing in the Himalayas.

After World War II the building was used by Dover Borough Council as a public library, but it passed into the possession of Kent County Council on local government reorganisation. When the library was relocated there were doubts about the future of the property, but a local campaign saved it and it became the offices of the Town Council.